Open any op-ed, journal article or Econ Twitter thread about education delivery in developing countries and there is a very good chance it will centre on one of two issues: access (how to get kids in school?) or quality (how to make sure kids are learning in school?). Of course, there is good reason for this – if kids aren’t in school (or if they aren’t being taught if they are) then it is unlikely they will be learning key competencies such as reading, writing and numeracy – with devastating consequences for economic growth and individual flourishing. However, in making these issues cardinal, we run the risk of blind-sighting ourselves to issues that are at once simpler yet more fundamental.

Consider the issue of school safety. If the government mandates a policy of compulsory schooling – which compels children to meet at the same place each day, five days a week – then we had better make damn sure that these places are safe for children to congregate. Safety is multi-faceted. Perhaps the most obvious component is the physical safety afforded by school infrastructure – are schoolchildren at risk of falling debris, open sewage or fire?

It is easy to take these questions for granted – I certainly did before I stepped foot in a school in Zanzibar. But consider these photos I took last week when visiting a pre-primary school – a school designed for children of four and five years of age. These children – barely out of nappies – play largely unsupervised in areas riddled with decaying ceilings, open gutters and precipitous drops unguarded by railing. The fact that no learning is taking place in this school seems secondary to the fact that there is an accident seemingly waiting to happen every single day.

Figure 1: A Pre-Primary School in Zanzibar 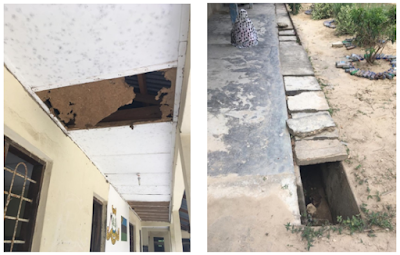 Of course, accidents do happen, and the results can be devastating. In 2004, a primary school in the Indian state of Tamil Nadu caught fire due to an illegal thatched roof. 91 primary schoolchildren died that day – a tragedy of a scale that's difficult to comprehend. It is hard to think of a commensurate failure in education delivery.

The Threat Posed by Teachers

Unsafe buildings are not the only threat posed to children: a more frequent and intentional threat is posed by aggressive, lecherous and untrained members of staff. A 2011 study by UNICEF in Zanzibar revealed that over 70% of students reported having experienced some form of physical or humiliating punishment at the hands of educators – a fact which has devastating impacts on children’s incentives to attend school. Despite large decreases in recent years, approximately 69 countries still allow corporal punishment in schools, including parts of the United States, some Australian states and large swathes of Africa and Asia (Gershoff, 2017).

More shockingly, sexual abuse perpetrated by teachers remains ubiquitous, particularly in countries towards the bottom of the income distribution. In Liberia, 1 in 4 primary school age children admitted to having had sex with a teacher, and 1 in 3 admitted to having sex with a member of staff (Steiner et al., 2018). These grim statistics are reflected in Kerala, India, with 21% of schoolchildren reporting having been sexually abused in a school environment over the past year, with surprisingly far more boys reporting abuse (29.5%) than girls (6.2%) (Kumar et al., 2017).

Issues like these strike at our emotions in a way unlike issues related to enrolment or pedagogy. Despite this, they comprise a much smaller part of the overall conversation. If you wanted to find out what works in raising attendance or test scores in schools, there are literally hundreds of studies that have tested all manner of interventions in all manner of contexts. However, if you wanted to assess the prevalence of sexual violence or unsafe infrastructure in schools – and what can be done to improve it – you would struggle to find anything like the body of evidence behind access and quality. As Justin Sandefur notes, there is a strange paradox at play here: what we choose to focus our research on seems disproportionate to what we care about as parents, siblings and people. I'm not a parent - but if I were I imagine I'd care more about whether my child was vulnerable to sexual assault than I would about whether my child learnt anything today in school.

In a scintillating open letter to a new Minister for Education, Paul Skidmore recommends immediately conducting an independent, internationally-recognised literacy and numeracy assessment to see whether children are learning anything of value in school. This is undoubtedly a good idea – but does not dig deep enough. As well as asking whether children are learning anything in schools, a more fundamental question would be: are schools safe places for children? Such a question would necessitate a school and teacher audit to go alongside any measure of basic competency.

Likewise, academic researchers should recalibrate their focus and make a more concerted effort to identify ways in which unsafe practices in schools can be reduced or eliminated. Recent work by the Behavioural Insights Team which assesses different strategies for changing teachers’ attitudes towards corporal punishment in the Nyarugusu Refugee Camp in Tanzania makes for a promising start (Behavioural Insights Team, 2017).

The benefits of this would be manifold. Crucially, making schools safer will have positive knock-on effects on the two topics currently in the limelight: access and quality. It doesn't take a PhD in Economics to figure out why in environments where they can be hurt and abused, children may be less engaged in class and less willing to show up altogether. More fundamentally though, eliminating unsafe practices can ensure that child's rights are better protected - a benefit which is difficult to overstate.

How to Write an Essay

People occasionally ask me if I have any advice to offer them on how to write a good essay. Most of the time, I reply with fairly long-winde...